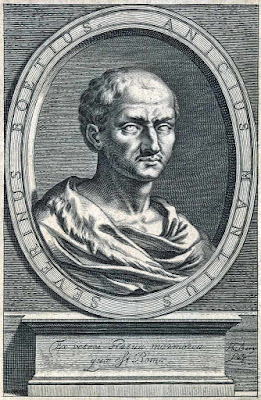 Anicius Manlius Severinus Boethius, born ca. 475-477 AD, was an aristocrat who held many influential positions in ancient Roman society and government. Boethius, as he is commonly known, was a Roman statesman, philosopher, public administrator, and translator of Aristotle’s works. He is considered the Father of Scholasticism, or at least its principal contributor. Scholasticism is an approach, manner, and method of thinking and philosophizing that Boethius bequeathed to the so-called Middle Ages after his untimely demise.

Boethius is one of my favorite philosophers, perhaps because he is not well-known like other classical and medieval philosophers such as Aristotle and St. Thomas Aquinas, respectively. He lived during a critical moment in time, when the ancient world was giving way to the medieval world, a time of late antiquity.


Boethius is best known for his Consolation of Philosophy, a work he wrote while in prison for being wrongly accused of treason. In his book, Lady Philosophy visits Boethius in his prison cell to discuss many difficult philosophical issues concerning the human person, life, and how to live.

I cannot help but identify with Boethius in some respects: my government work and my love for philosophy and languages. During his time, Boethius felt the need to pass on the classical education he learned and culture he enjoyed to his future intellectual heirs. I find myself in a similar situation, of feeling a need to help pass on the gems of classical and medieval education, philosophy, and any small contributions I make in the field of economics to future generations.
After his execution in 524 AD, Boethius’s works were considered authoritative sources for learning throughout the Middle Ages because they served as the foundation for the renewal of classical education.  Even after the introduction of the philosophical translations of Aristotle’s works by Muslim scholars in 12th century Europe, Boethius’s works continued to be authoritative and still are today.  St. Thomas Aquinas, for example, quotes Boethius extensively in his works and builds upon his principles.

One of my favorite Boethian principles is found in his classical definition of the human person, “an individual substance of rational nature” (persona est naturae rationabilis individua substantia), in his Liber de Persona et Duabus Naturis. St. Thomas builds upon this definition on the human person in his Summa Theologiae.


Of particular relevance to economics and other social sciences, St. Thomas provides his views on the division and hierarchy of the sciences and their methods in a Commentary he wrote on Boethius’s De Trinitate. Of course, economics did not exist as the specialized discipline we know today in either of Boethius’s and St. Thomas’s times, but his Commentary elucidates a way of thinking about how the social sciences are closely interrelated and where economics lies within the hierarchy of sciences, according to the medieval understanding of science.
With this in mind, interdisciplinary work done today between social sciences, and between the humanities and the social sciences, are considered to have the same starting points (or principles) because they have more in common despite their limited domains as specialized modern disciplines. This starting point is the human person. As a result, so-called interdisciplinary research is not inter-disciplinary when viewed from St. Thomas’s point of view in his Commentary on the division and methods of the sciences. These modern disciplines, or sciences in the medieval sense, only differ in their formal objects.


A case-in-point is the recent work of economist professor Richard Thaler from the University of Chicago, who won the Nobel Prize in Economics in October 2017 for his work in behavioral economics. Behavioral economics seeks to include human psychological phenomena in economic models to increase their predictability. Today, this fusion between economics and psychology is seen as interdisciplinary work because of their specialized domains of inquiry, but to the medieval mind, thanks to Boethius’s De Trinitate and St. Thomas’s Commentary on that work, both disciplines have the same efficient cause, the human person, and the combined study of psychology and economics is really one of the many practical activities of the human person in the economic institutions of society such as market activity.
Like Boethius’s classical definition of the human person, which helped provide an understanding of the essence of the sciences through St. Thomas’s works, there is much more to learn from Boethius and St. Thomas Aquinas today. Modern sciences have become so specialized that one is hard-pressed to find their interrelationships. A way to ameliorate this problem is for economists to study the classical and medieval philosophers in the history of economics. The Boethian Renewal is an attempt to step back and reintroduce classical education and the economic thought in the philosophy of these thinkers to help guide modern economists make better policy decisions. Most economists today agree that Adam Smith was the father of modern of economics, but he was a moral philosopher who relied considerably on the classical philosophers.

It has been said the in the history of mankind, there were certain events which catapulted human society by quantum leaps. Some poignant examples include the invention of tools, the wheel, fire, cuneiform (or writing on cave walls). In the West, it was ancient Greek philosophy, the Judeo-Christian faith tradition, ancient Rome, the learning tradition of the Catholic monks, scholasticism, the medieval guilds and the subsequent rise of the medieval universities, and the invention of the Gutenberg press, to name a few innovations.  There was also the technology that made possible the Industrial Revolution in the 18th century.

However, although technology improves many aspects of our lives, I contend that unlike previous quantum leaps in our society, it has made our society complacent with respect to learning true principles. Thanks to the marvels of the internet and digital era, we have at our fingertips all the information we want on any topic nearly instantaneously, but have forgotten how to think about the information we obtain. Although our technology may seem other-worldly to the Ancients, our understanding of wisdom leaves much to be desired.  I imagine that the Ancients would be perplexed about our expertise in specialized disciplines without knowing part-whole relationships. More alarming is that our society mistakes the quick information retrieved online for wisdom; we have forgotten how and where to acquire wisdom.

As in Boethius’s time, we are once again at the cusp of this world giving way into another world and generation, that of the world of Millennials and Generation Z. My generation, “Gen X,” benefited from what the Baby Boomers and the Silent Generation taught me: the perennial principles and values inherited from the classical and medieval intellectual culture and heritage.

Like Boethius, my purpose is also to transmit the treasures of classical and medieval principles and values to future intellectual heirs to the best of my ability, hence The Boethian Renewal.